The Details Behind the Day....

Diary for today.  Tucker had a car ride to the library to drop off some books! While he was sleeping, a second batch of soap was made!  And during another nap, I made a flange binding for an art wall hanging! Sounds like a fun, easy, relaxing day, eh?

Here’s the version with the details: Tucker experienced his first car ride since we got him today.  I used a seatbelt for dogs.  He was in the back.  He whined and howled, even when I had a hand on him.  There were sporadic moments where he lay down seemingly content.  Those were short moments.  Once we returned from the 10 minute ordeal, he lay in my arms, cradle position for 5 minutes to be soothed from the trauma.

Making soap has some tricky parts, timing wise.  So, when my sleep deprived brain thought it through, I decided to mix the lye and water before I put Tucker down for a nap.  It’d happened in the bathroom, with window open, fan on, door closed.  It needs to cool for 30 minutes, before it’s added to oils.  All other ingredients were on the kitchen table. The coconut oil was melting on the stove. I need goggles and gloves.  So Tucker and I headed to the barn to get a pair of gloves—I use them when I put ointment on the horses.

Okay—Tucker is in the other room playing with a toy, so I sneak into the bathroom to pour the lye into the water. It’s so strong.  I hustle out to get the pup in his crate for a nap.  Success! He’s sleeping.  I measure the oils and go to check the lye temp.  Too hot still.  I decide to make some oatmeal while I wait because it’s 10 am, I’ve been up since 5:30, and the belly rumbles.  Before I stir in the blueberries, I check lye solution again.  I notice it’s chunky on the bottom. Oh no. I reread directions.  It says “stir lye into water.”  Rats.  I forgot to stir.  Not sure what to do, but not willing to wreck a batch of soap, I decide to get rid of this toxic stuff. Donned with goggles and gloves, I find a shovel in the barn, and carry it and the bowl of undissolved lye to the back of our property, dig a hole, dump it in, cover, and add a rock. Back to the house.  I measure out lye again, and add it to the water, stirring well. A few spoonfuls of oatmeal are shoveled in.

Next check is 117*, then finally 111*.  Directions say 100-110*. Close enough!  I pour it into oils and cautiously turn on the immersion blender for several spurts.  It’s loud and I cannot wake the pup. Must NOT wake the pup.  The blender is used to stir, then I blast it again for a few seconds.  Stir. Blend. Stir, stir, stir.  Blend. I’m waiting for trace (when some of the mixture dribbles off the blender and leaves a trace of a trail when it hits the surface.)  Thirty-five minutes pass, and still no trace.  A thickness is noted.  “Lord,” I pray, “I need this to reach trace, or for Tucker to sleep longer.” I long to text my soap making friend, but I have gloves on and no extra pairs in the house.  Finally, I strip the gloves, and text.  Then I google.  I learn if hand stirring, it takes 45 min-1 hour to reach trace, but using the blender speeds things up quickly!  An answering text reveals the same.  So I unplug and move the operation to the bathroom so the door can be closed.  Short cord, so I sit on the bathroom floor and blend away. No gloves on, so I’m careful.  Trace is reached in a few minutes. “Thank you, Lord!  You even care about soap!” I head back to the kitchen to stir in the essential oils, and pour it into a mold. I get cleaned up and everything put back just before the pup calls. Whew!  Not a relaxing experience, but it should be a wonderful batch!

For Tucker’s next nap I decide to skip the 2.5 mile walk and head to the studio to figure out if a flange binding will work on the artsy wall hanging I want to finish. Excited to find a fabric that will work without shouting its presence, I make a scrap binding and cut the pieces for the flange. Everything is ironed, and I decide I have time to sew them together. There are many seams in this 120” long piece so I go slowly, so happy I’m finally getting this step completed.  Once I reach the 110” spot, I notice I’ve not sewed right sides together. No!  I spend the last minutes of that nap, ripping out 100” of seam.  Just as I pull it all apart, the pup awakes.

He and I head out for a walk, and lots of play time.

When it’s time for another pup nap, I decide to use another for studio time. I get the binding sewed correctly, and get it all ironed. The quilted piece is trimmed.  A hanging sleeve is made.  The whole caboodle was under the needle to start sewing, when the husband came home and the pup awoke.

And that’s the rest of the story.

Here’s the Filly piece.  My gosh, after it was trimmed it looked amazing.  Maybe one of the prettiest artsy pieces I’ve made.  Hope to get the binding on today.  More photos when it’s done.  It’s sold. 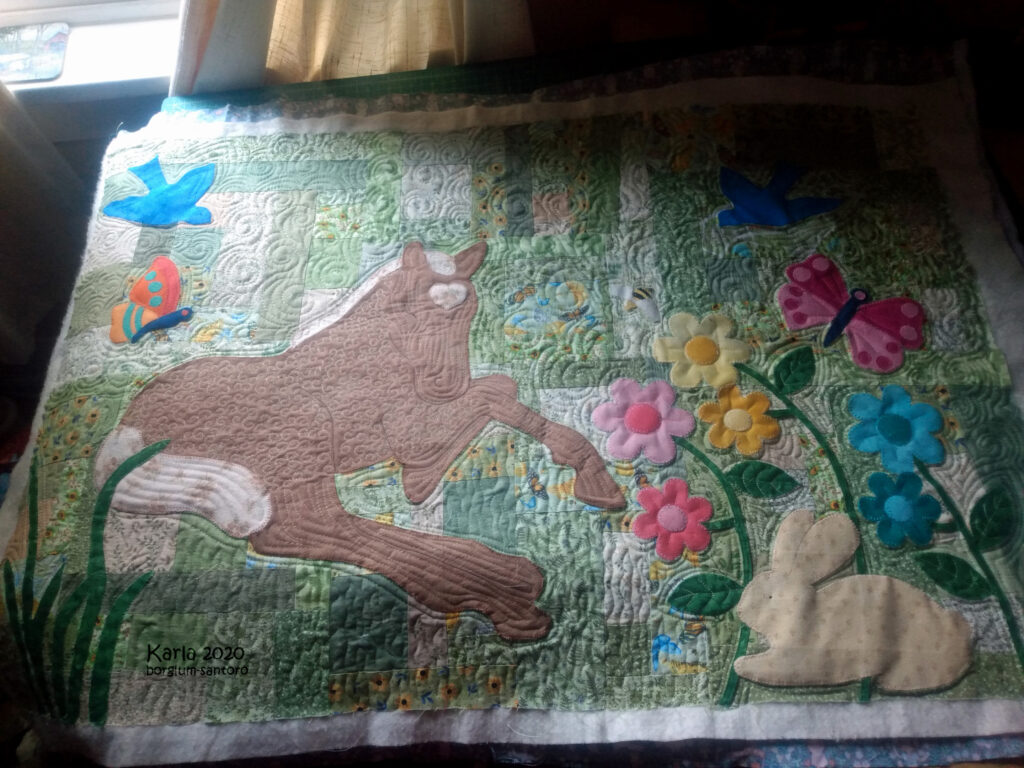 And here are Tucker and Buddy. Life is busy. Heart is full.