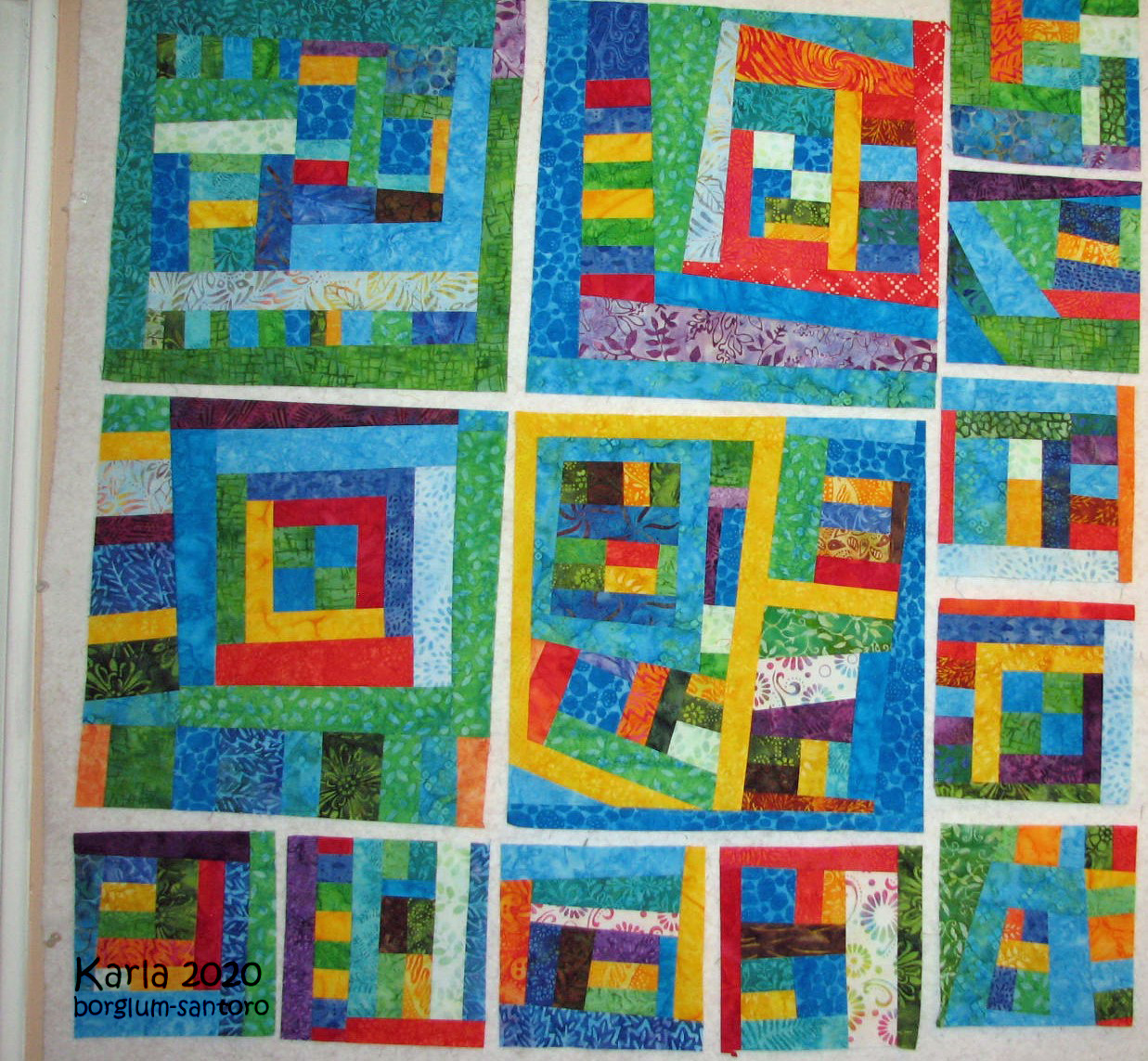 Sometimes it’s so refreshing to play with fabric scraps and not measure anything until it’s time to trim the final block.  No rules, unless they are made up for fun, like every block must have at least a spit of yellow! The block size doesn’t even have to be decided on until several additions have been made.

My batik scraps were calling me, and after making several patterned pieces, it was time for some hodge podge. I  started sewing a few strips together, to maybe make a block or two to tuck away for later.

Several wee blocks were started, with one piece added to each to each for awhile. Pick a strip, sew, iron, trim.  Repeat.  The first one was looking good trimmed to 7.5” square. Perfect.  Up it went onto the design wall. I started several more.  Once 7 were done, I added some black lattice between four and gave it a private 2 thumbs up.  It measured a tricky 15.25”, but with a 15” ruler and with the help of another, it worked.

The plan now is to make four to six big blocks with black lattice and call it good.

Then one block was especially pretty.  It kept growing past 7.5”.  When I stopped to see where it was, it could be trimmed to 15.25” square. Perfect!  Up it went on the design wall next to the others.

But a plain one didn’t look right with the ones with black lattice. It didn’t belong.

The third block ended up at 15”.  It was so beautiful.  Adding more would make a weird small seam too close to an edge.  I could cut it up and add to the pieces, but it was too beautiful to cut.  So, I ended up slashing it through the center (gasp) at an off angle (improve, remember), added a strip of black, sewed it back up, and it still didn’t quite measure 15.25”.

Nothing coming.  I’ll make more 7.5” blocks while I ponder.

More of the 7.5” blocks were added to the design wall.  And I saw something. Something good.

Adding an outside column and row of 7.5” blocks to the four big blocks looks amazing!  Amazing enough to change the plans.

New plan!  Make two tops—one with big black lattice blocks, one with big plain blocks, and add an outside row and column of small blocks to both!

That plain big block is so pretty, it’s decided to focus on finishing that top first. The black lattice blocks are moved to the bottom of the design wall.

Happily I create another big block.  It started with a pretty four-patch, and I added logs around it. In hind sight, the color of the logs should have changed, but it was looking so good, each round of strips was the same color.  All the way to 15.25”.

Up it went on the design wall with the others!

And it didn’t look right with the improv ones.  It was too orderly. Oh no.  Now what?

The plain block top is finished (somewhere along the way it was decided all the big blocks will be 15”, which didn’t save fabric, but it saved on sanity. Important.  The smaller blocks need to be 7 3/8” to fit the pattern.) and it’s posted.  Happily it got lots of thumbs up.

Back to work on the black lattice blocks. Now it’s clear the one with the black strip at an off angle doesn’t fit with the 7.5” blocks with black lattice.  Two blocks have neat 90* angles, the other doesn’t.

The log cabiny top was next to finish.  Big blocks were made. One was so pretty—and if trimmed to 15” it will lose two sides of color. Can not happen. So, that one was trimmed to 16”. The plan now includes one pillow cover. 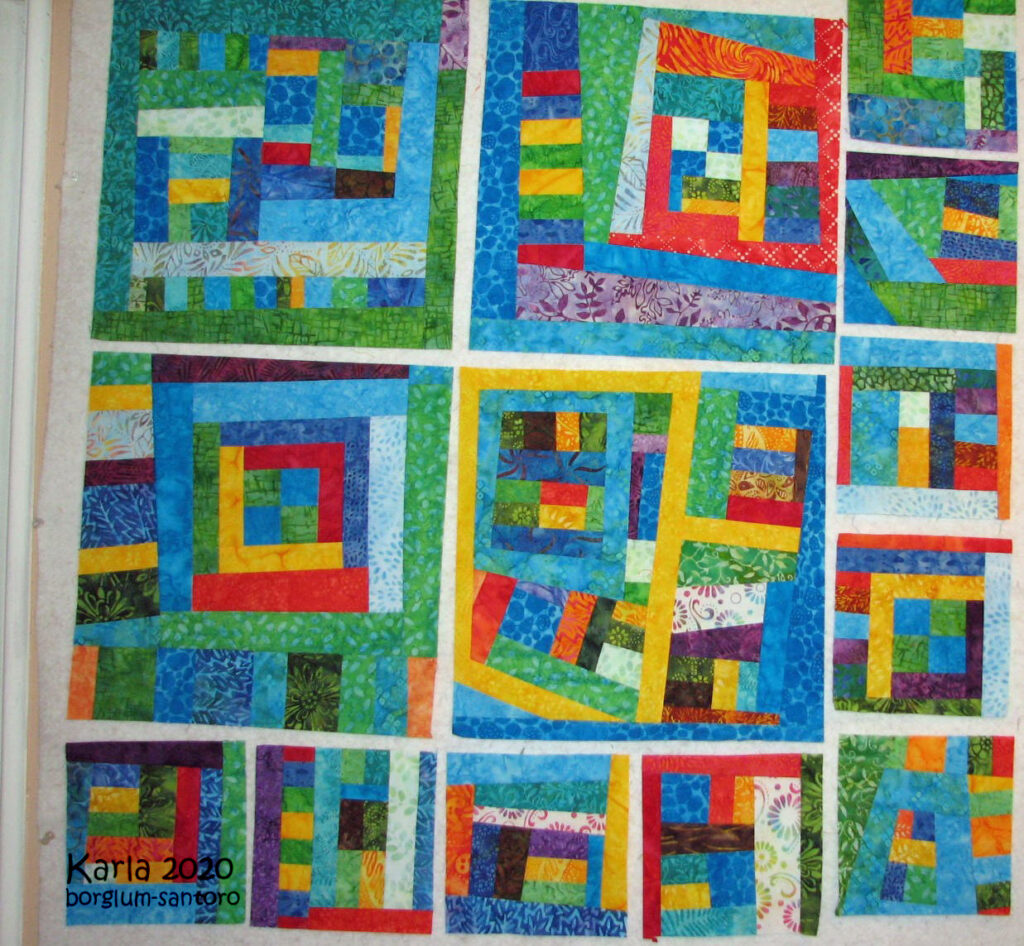 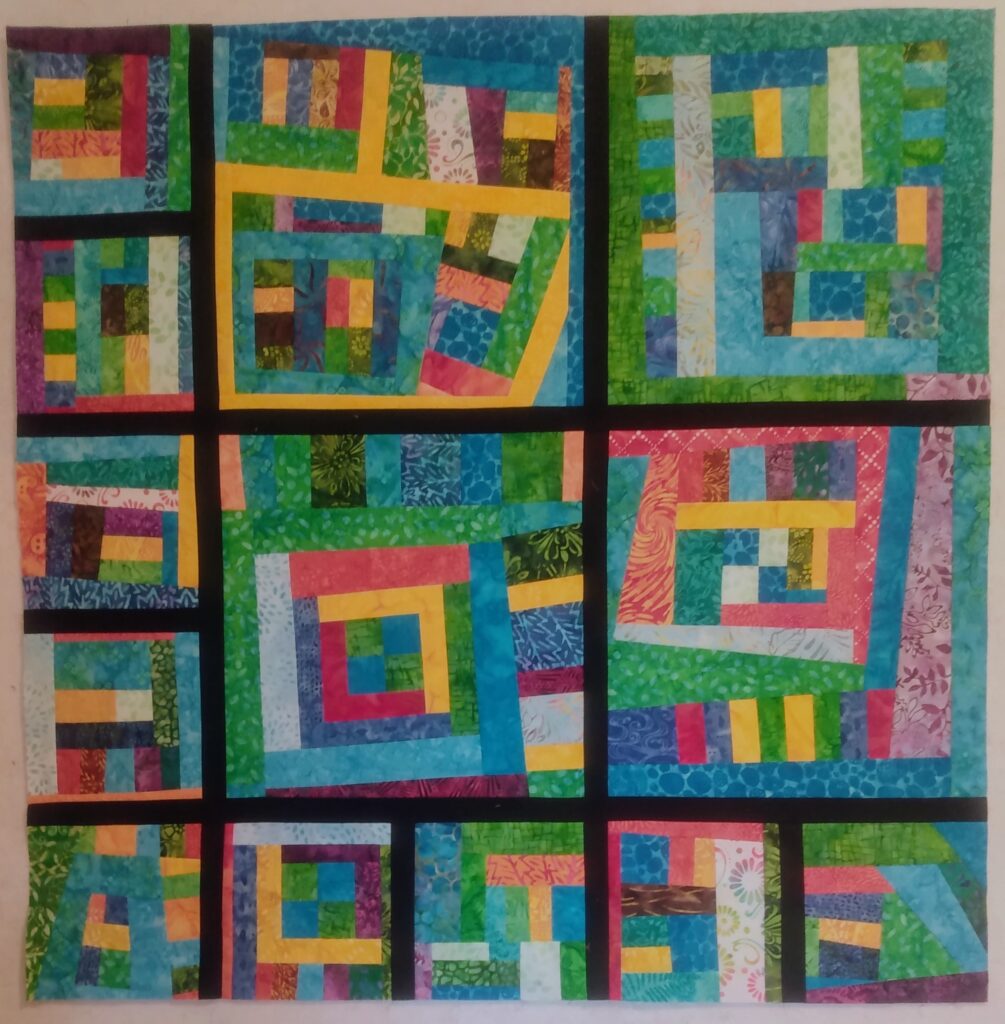 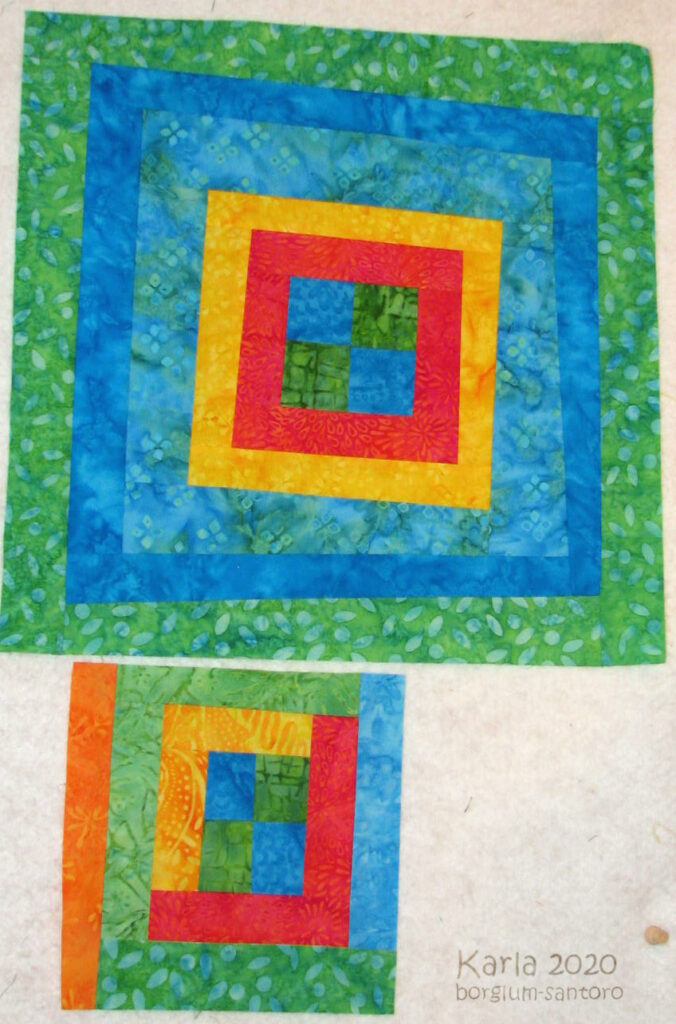 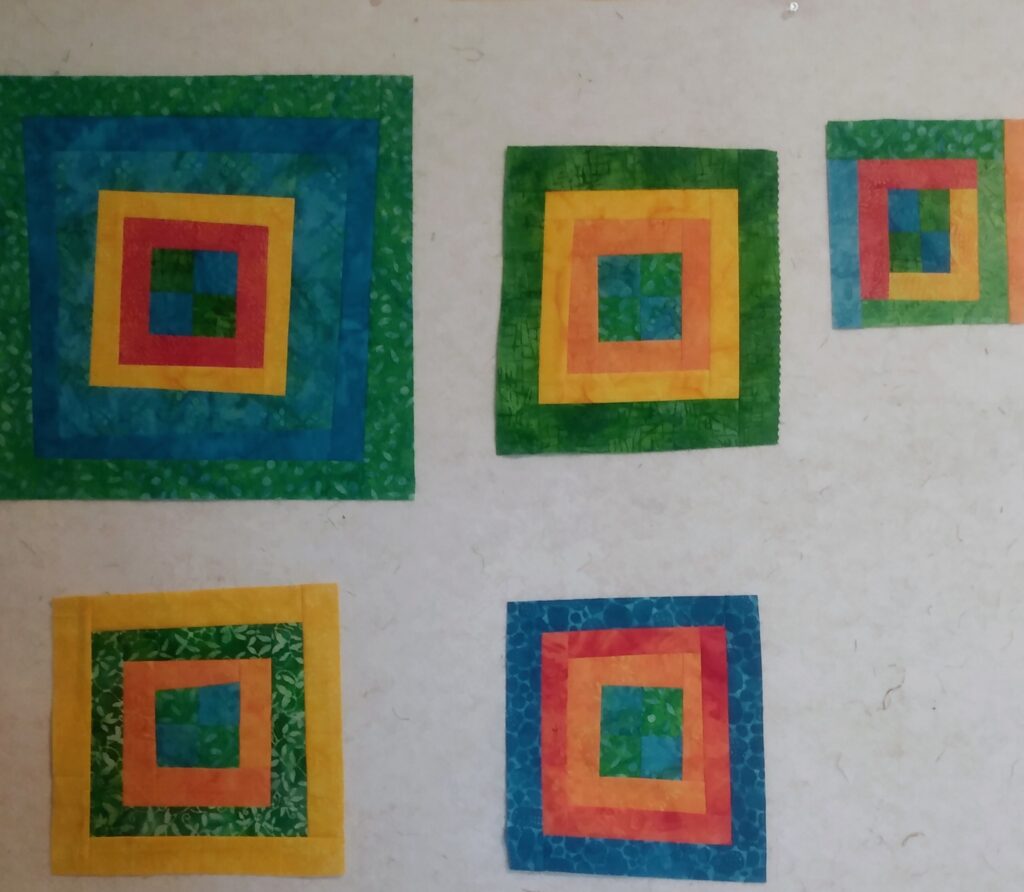